A performance of 6 contemporary works, written for percussion solo and played by Julien Mégroz, with no hit and (almost) no instrument!

The percussionist, to whom composers gave a “real” musician role in the 19th century, is today one of the most important and strategic character of the world of new music.

From the 50s, he has been the “guinea pig” of the composers, always ready to experiment new ideas, new techniques or even new instruments, which enrich day after day the skills of this hybrid musician.

This solo program made of six works, of which two are personal compositions, (including a new creation especially written for this project) emphasizes on these new techniques. Precisely because, in a time when all these possibilities exist, the general tendency would still associate the percussionist to the image of someone who bangs on a big set-up made of drums and cymbals… 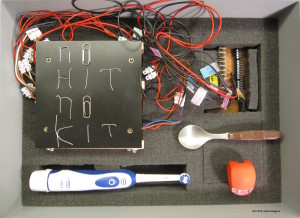 But this era is definitely over! Today, it is possible to play music written for a percussionist, without having any single stroke. All pieces in the program have been written with techniques such as rubbing, scratching, shaking, magnetizing, filming or even miming. Sometimes visually very strong (De Mey, Berger) sometimes repetitive and conceptual (Mégroz, Hauser), sometimes even “improbable” (Maierhof), these works aim all for original and simple ideas, while remaining more surprising the some than the others.

To create a solo percussion program, is needed several works, several concepts and thus very often, several sets of instruments. Every composer chooses, rightly, a set of instruments according to his envies, and rare are pieces for solo percussion, written for an already existing installation. The logistic problem, which ensues from it, remains today the main issue of the career of the percussionist …

The program NO HIT NO KIT is then thought according to this parameter, so that it is easily transportable, and thus practicable within the framework of tours. It includes works, which ask for quite little equipment: the whole set of the concert fit in a single suitcase!

It is thus an exciting program, new and adaptable as much to small theatres as concert halls, and which will fascinate amateurs of experimental sounds as well as curious music lovers of all kinds. 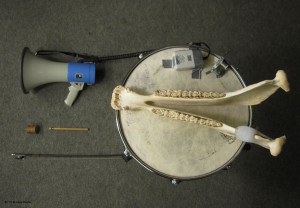 The european tour in february 2016, with concerts Berlin, Vienna, Paris and Basel, received support from:

as well as donations from generous private contributors, over the crowd funding website www.wemakeit.ch